The Yiddishists of the eastside hills, a community destroyed by the Red Scare 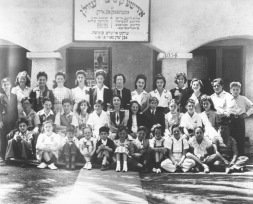 The JPFO-IWO folkeshul, the most popular network of Yiddish dayschools in the area which was run by Jewish labor socialists.

The Los Angeles neighborhoods of Boyle Heights and City Terrace have always been working-class communities, and the home of many progressive and leftist causes. This is a tradition which was well established early on by the politically and socially active Jewish community which flourished here in the first half of the 20th century.

So many ideas on how to fix society bubbled out of this community! Everyone, young and old, promoting social advancement. However, with so many visions being proposed and tried there were bound to be some contentions along the way. Yet, many of the communal schisms were caused by cautious fears of persecution as much as internal conflict over a social vision.

In 1922 political tensions in the Arberter Ring/Workmen’s Circle created a rift, out of which grew the leftist branch of the organization which would become known as the International Worker’s Order (IWO). However, the rift was so great that the IWO made an official break-away in 1930; promoting leftist, progressive values and operating as a fraternal mutual aid organization and insurance provider.

The organization also organized 13 other major ethnic communities and languages – including Italian, Spanish, Ukrainian, Greek, Portuguese, etc. However, in the first half of the 20th century the Los Angeles Jewish Section was the largest and most important Jewish organization there was.

The group started a couple folkshule sites – two Jewish community centers in two notable locations. They ran two Jewish kindergarten day-schools off Wabash, enrolling most of the kids from the area; one of them being the yellow house sitting at the corner of Wabash and Stone.

The front of the former Kindereshul, at Wabash and Stone, City Terrace, Los Angeles.

The JPFO-IWO folkeshul, the most popular network of Yiddish dayschools in the area which was run by Jewish labor socialists.

The current owner tells me in Spanish; “This didn’t used to be a house, it was a Jewish temple!” Explaining that he has owned it since the 1950s. He also points out a handful of other properties he brought from Jewish people, “Do you know owns the Liquor [store]? Soy yo.. it’s me!”

Then they founded the Jewish Cultural Center in City Terrace, which was eventually demolished to make way for the off-ramp to the 10-freeway. This Jewish cultural center once sat directly at the spot of the current freeway ramp, just immediately east of today’s City Terrace Spanish Congregation.

The City Terrace Jewish Cultural Center, on Grand Opening Day 1947. It was eventually closed during the Red Scare.

The building was demolished.

The site of the old JCC now sits directly in the exit for the 10-freeway exit at City Terrace Drive.

What you see today as you exit from City Terrace Drive.

However, it must be stated that the loss of these resources for the community was not just on account of displacement. The political tensions and the fear of the community being targeted as socialists during the Red Scare, these also played heavily into the gutting of the resources of the largely progressive Jewish community here.

“After the Second World War, the rise of McCarthyism with its intense focus on Hollywood leftism together with the virulently antisemitic campaign of California State Senator Jack Tenney, made IWO a clear target. It also became the prime scapegoat for anti-communists and anti-progressives and for members of the L.A. Jewish community establishment, which sought to publicly distance themselves from leftism.

Children of the International Workers order Jewish-American Section in Los Angeles, holding Yiddish protest signs. Even the children of the neighborhood were encouraged to be involved in labor and political activity from an early age.

“While the IWO-Jewish Section was one of the most popular Jewish organizations in the city and had more children enrolled in its school network than any other single Jewish organization, a campaign began in 1949 to expel it from the official Jewish Community. Members of the Jewish Community Council claimed that community support should not go to any “international” organization. Although the IWO-Jewish Section had become the Jewish People’s Fraternal Order (JPFO-IWO) in 1944, this was not enough. L.A. Jewish Community Council members challenged the JPFO as political movement and argued that its leftism was a violation of of the Community’s apolitical stance. When the JPFO argued that Zionist organizations were also overtly political, opponents claimed that its domestic politics were the problem and that support for the fledgling State of Israel was not to be considered a “political” cause. Partly to distinguish their particular liberal-left bent from the more radical JPFO, the Workmen’s Circle along with the American Jewish Congress argued vociferously for the JPFO’s expulsion.

“The L.A. developments followed the pattern of the nationwide McCarthyite witchhunt. IWO was placed on the U.S. Attorney General’s list of “subversive” organizations (Dec. 5, 1947) and the New York State Insurance Department of moved on December 14, 1950 to liquidate the Order on grounds that its significant cash reserves — far beyond what commercial insurers were required to maintain — would, in the event of war with the Soviet Union, be turned over to the enemy.

The City Terrace Jewish Cultural Center, on Grand Opening Day 1947. It was eventually closed during the anti-communist Red Scare.

“After a four year heated struggle, during which the IWO was added to the state’s list of “subversive” organizations, the Jewish Community Council (which became the Jewish Federation of Los Angeles in 1959) expelled the JPFO from the Jewish community, freezing the JPFO’s assets and actively worked towards its dissolution. The Community Council also began a process of halting support for the Jewish Community Centers on the Eastside — at the Soto-Michigan JCC and the City Terrace Cultural Center where JPFO members met. Within a few years, not only was the JPFO destroyed, but so too were the Eastside’s two most important Jewish cultural institutions.”

It might seem to some that the eastside Jewish community centers were inevitably doomed because of demographic changes, with Jewish people migrating away in great numbers, especially among the rapidly emerging youth demographic.

However, it is important to note that at the same time many other radical leftists and labor socialists were also moving here to be part of a movement; the eastside becoming one of the last-stand leftist enclaves. And it was that form of “threat” that drove the Jewish Community Relations Council (the forerunner to the Jewish Federation of Greater Los Angeles) to be both be complicit to McCarthyism and to also snuff out the eastside community centers.

Undoubtedly, this closing of these cultural sites which the remaining Yiddishists and Jewish social progressives of the area depended on further accelerated their exodus from the eastside.

All any historian can say at this point is that we would hope that if such political witch-hunting were to happen today that our community leaders would not make the same decisions. That we would instead have the integrity and courage to stand in resistance to such ultra-nationalism. I’d like to believe we have all learned our lesson, in light of this dark chapter of history.

We will explore this more when we further talk about the impact of the Senator Jack Tenny led witch-hunt against communists in Boyle Heights.

Now I should note that while the building of the City Terrace JCC was eventually demolished to make way for the freeway off-ramp, most of the other sites remain in one form or another; re-purposed as churches, houses, stores and youth centers.

In the near future I hope to talk more about the other Jewish and Yiddishist sites of City Terrace. There really is so much to explore. And yet there is so much that has been forgotten too. Do you or your family members have stories to share about the Yiddish community of City Terrace? I’d love to document them as well. 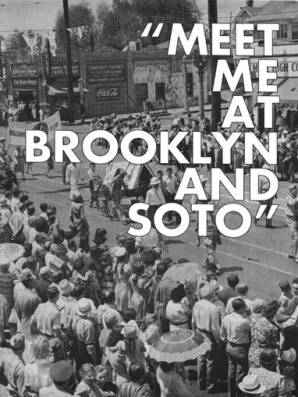 In 1996 director Ellie Kahn premiered a wonderful documentary called “Meet Me at Brooklyn and Soto,” about the old Jewish community of Boyle Heights, East Los Angeles. It is still one of the most well-known and most loved documentaries about the history of the neighborhood.

This documentary was released at a unique turning point in history. As a community which once was a vibrant home and business district for tens of thousands of Jews, dwindled down to only a handful of Jewish people remaining. It also came at a unique time when good old Brooklyn Ave was giving way to Cesar E. Chavez Ave, bearing witness to the transition of the area into a noteworthy Spanish-speaking neighborhood.

This documentary was created for the Jewish Historical Society of Southern California, the parent organization for the Breed Street Shul Project. Which had begun to restore the grand and beloved synagogue just a few years before.

This film weaves in so many gorgeous old pictures as it tells the story of the neighborhood. Showing glimpses of some of these notable sites as they once looked in the old days. It gives us a good view into the social aspects of the neighborhood. And presents us with wonderful testimony of an active community, rich in Yiddish culture and leftist organizing, as recounted by former residents.

What I love so much about this film is the personal stories from people who grew up in the area. I think it is one of the most heart-warming documentaries you will find.

Back in 1996 when the film was first released, it was shown on PBS. The Los Angeles Times reported it as the center piece of a 90-minute KCET special with Huell Howser in October of that year. The special featured a brief chat with Kahn and “ends with his own walking tour of a vastly different Boyle Heights than the one memorialized by her.” (Los Angeles Times)

This documentary by Kahn was released on VHS, and became an instant favorite in the area. Being passed down from person to person in the neighborhood, until the tape has worn out. I have even shown worn out copies of it a few times at back-yard screenings in the neighborhood.

It has never been released before in DVD to my knowledge. So people have been anxious to see this film for many years now.

Recently I was amazed to see that some Boyle Heights residents were sharing a digitized copy of this film on social media, uploaded into several parts due to it’s length. Though this might not be an authorized copy, I think that given the fact that after 20-years this has not been re-released in a digital format, we can turn a blind eye in charity!

Meet Me at Brooklyn and Soto 1 from Milly Hock on Vimeo.

Meet Me at Brooklyn and Soto 2 from Milly Hock on Vimeo.

Meet Me at Brooklyn and Soto 3 from Milly Hock on Vimeo.

Meet Me at Brooklyn and Soto 4 from Milly Hock on Vimeo.

Meet Me at Brooklyn and Soto 5 from Milly Hock on Vimeo.

Meet Me at Brooklyn and Soto 6 from Milly Hock on Vimeo.

Meet Me at Brooklyn and Soto 7 from Milly Hock on Vimeo.

Meet Me at Brooklyn and Soto 8 from Milly Hock on Vimeo.

Meet Me at Brooklyn and Soto 9 from Milly Hock on Vimeo.

It is not infrequent that Latino residents of Boyle Heights have related to me that they have sometimes felt that historians of other ethnicities have been overly nostalgic and have tended to avoid the harsher realities of life here. And sidesteps the coarse racial issues which were historically present and which still linger in Boyle Heights.

The above cited Los Angeles Times article by Howard Rosenberg noted: “Kahn says that a couple of former residents she contacted worried about the film’s nostalgia softening reality. But the ethnically mixed Boyle Heights depicted here is not one of constant harmony, even though we do hear stories of connections made between diverse cultures.”