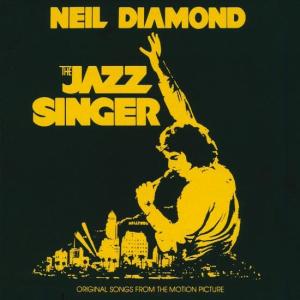 So far we have discussed the original “The Jazz Singer” (1927) with Al Jolson; as well as the very fine remake, “The Jazz Singer” (1952) with Danny Thomas. However, there is one more version left to discuss, a version that would be rather forgettable if it were not for the fact that scenes of it were filmed in the sanctuary of the Breed Street Shul, in Boyle Heights.

In 1980 there would be a second big-screen remake of The Jazz Singer, this time casting Neil Diamond in the lead role of the cantor’s son and the father played by Laurence Olivier. The film which got off to a rocky start due to studios and actors bailing on this project early on, though when the female lead dropped out of the film they re-cast the part with Lucie Arnaz, the spunky actor-singer daughter of Lucille Ball and Desi Arnaz.

This was supposed to be a first glorious on-screen break in a feature film role for singer Neil Diamond. Though this proved to be a role in which he would fall flat.

When this movie was released Roger Ebert gave it one of his most epic thumbs-down rants of all time:

“The Jazz Singer” has so many things wrong with it that a review threatens to become a list. Let me start with the most obvious: This movie is about a man who is at least 20 years too old for such things to be happening to him. “The Jazz Singer” looks ridiculous giving us Neil Diamond going through an adolescent crisis.

The movie is a remake, of course, of Al Jolson’s 1927 “The Jazz Singer,” which was the first commercially successful talking picture. The remake has played with time in an interesting way: It sets the story in the present, but it places the characters in some kind of time warp. Their behavior seems decades out of date, and some scenes are totally inexplicable in any context.

For example: In the film, Diamond plays a young Jewish cantor at his father’s synagogue. He is married, he has apparently settled down to a lifetime of religion. But he also writes songs for a black group-and when one of the quartet gets sick, Diamond takes his place, appearing in a black nightclub in blackface. Oh yeah? This scene is probably supposed to be homage to Jolson’s blackface performance of “Mammy” in the original, but what it does in 1980 is get the movie off to an unintentionally hilarious start.

The bulk of the movie concerns Diamond’s decision to leave New York, his father and his wife and go to Los Angeles, where he hopes to break into the music industry. This whole business of leaving the nest, of breaking the ties with his father, seems so strange in a middle-aged character: Diamond is just too old to play these scenes. But no matter; the movie is ridiculous for lots of other reasons.

Ebert would then call out this production for being a string of mostly predictable story lines which plod on relentlessly, and blasts the rewritten lead role for dripping in narcissism. In fact he even goes on to make this biting charge against Neil Diamond himself:

But then Diamond’s whole presence in this movie is offensively narcissistic. His songs, are melodramatic, interchangeable, self-aggrandizing groans and anguished shouts, backed protectively by expensive and cloying instrumentation. His dramatic presence also looks over-protected, as if nobody was willing to risk offending him by asking him to seem involved, caring and engaged.

Diamond plays the whole movie looking at people’s third shirt buttons, as if he can’t be bothered to meet their eyes and relate with them. It’s strange about the Diamond performance: It’s not just that he can’t act. It’s that he sends out creepy vibes. He seems self-absorbed, closed off, grandiose, out of touch with his immediate surroundings.

As harsh as his criticism is, I have to agree; this is probably the most tragic productions and performances I have ever seen on film.

This performance would earn Neil Diamond a Razzie for the worst performance in a feature film; and remains marked as one of their 10 worst films of all time.

I’m told by my film director buddy David Herrera that the Neil Diamond version of this film quickly became film school comedy fodder. And a subject of ridicule for his use of modern-day blackface and that fight scene that this act ensues in the film. Herrera claiming that next to “Mommy Dearest,” it is one of the funniest unintentional comedies ever made. The film and the acting are just that bad.

In the opinion of many film makers, The Jazz Singer is considered the holy grail of Jewish entertainment history, a film with a yichus (legacy); which Neil Diamond royally screwed-up in.

Neil Diamond would later make this claim to explain his regrettable attempt at acting:

“I decided while I was doing The Jazz Singer that I’d rather be a really good singer than a mediocre actor; that I’d concentrate on my music, my records and my shows.”

Though this film, in my opinion, was made even worse by the fact that Neil Diamond’s attempt at cantoral musical performance is absolutely terrible and irredeemable.

The film features only about 30 seconds of a recitation of Adon Olam, which is rushed to completion by the character of the impetuous son; and about a minute-and-a-half performance of a rather soulless version of Kol Nidrei.

However, it was not for lack effort on behalf of the producers to make a first-class film.

Neil Diamond did actually train with a well-respected Los Angeles cantor in order to prepare for the part. He was coached for the part by one of the greatest cantors in the country, Cantor Uri Frenkel of Temple Ner Maarav in Encino; who also appears in the film, and who was a personal friend of Neil Diamond. 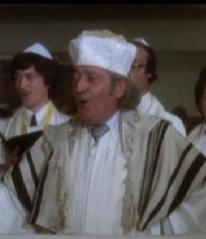 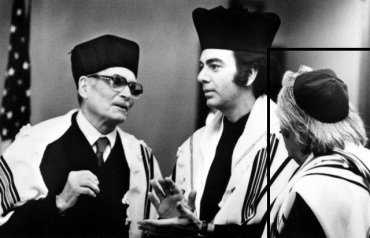 And for the most important musical score of the movie, the Kol Nidrei scene at the end, they had also hired the best backing vocals. The men’s choir seen and heard from the bimah, they were professional choral singers from the impressive choirs of congregations such as Sinai Temple and Temple Beth Am.

When released the remake film was a flop, however, the soundtrack went on to be a major success selling over 6-million copies. This soundtrack would become notable for releasing a few of Neil Diamond’s most lasting musical standards, among them being the film’s reprising featured song “America” – also known as “They’re coming to America.” 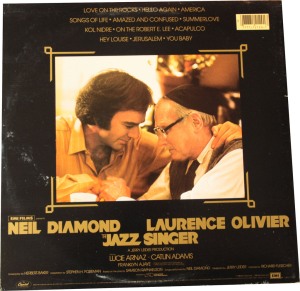 Now with the critical analysis behind us, let me state that visually there is something which does make this film a historical treasure, especially for Boyle Heights history enthusiasts.

Though in the 1980 Neil Diamond remake of The Jazz Singer the family again lives in a Jewish neighborhood in New York City just as the original film had, the synagogue scenes were likewise filmed in Los Angeles.

Now in order to evoke this sense of a young man returning to the heimish Jewish community of his family and youth, the producers chose to film the synagogue interior shots in the most old-school orthodox Jewish synagogue in Los Angeles; Congregation Talmud Torah – The Breed Street Shul in Boyle Heights, East Los Angeles.

In the Kol Nidrei scene, it opens up with the camera focused on the lights of the shul’s seven branched menorah and then zooms outward to reveal a filled sanctuary. The entire floor level filled with men, the women are filling the balcony; according to the orthodox tradition. It is rather impressive to see this grant sanctuary dressed for the High Holy Days and filled to the ceiling. 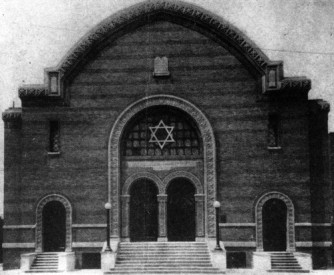 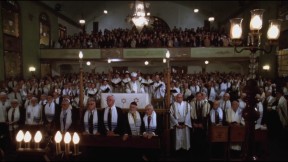 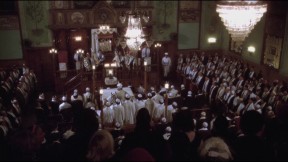 And being that Orthodox Jewish congregations never film during Shabbat or Holy Days, in this film production we probably get the only good look of what a service inside the Breed Street Shul would have actually looked like.

When this film was released in 1980 the Jewish community had already migrated away over a quarter-of-a-century before, however, a small group of worshipers still returned regularly for services in the sanctuary; especially on days when a minyan was needed for Torah services, and on High Holy Days.

However, just a few years after this movie was made the synagogue building would be damaged and abandoned.

On October 1st, 1987, the Breed Street Shul was damaged by the Whittier Narrows Earthquake, the magnitude 5.9 earthquake compromised the structural integrity of the non-reinforced brick building. The grand sanctuary was damaged and subsequently red-tagged, just two days before Yom Kippur.

This tragic event would make the film footage from the sanctuary in the 1980 version all the more valuable, and even more memorable than the rather forgettable production it is taken-from.