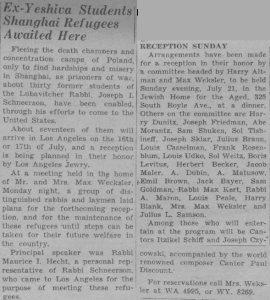 The B’nai B’rith Messenger in July of 1946 made this announcement for an upcoming event to be held in Boyle Heights, East Los Angeles:

“Fleeing the death chambers and concentration camps of Poland, only to find hardships and misery in Shanghai, as prisoners of war, about thirty former students of the Lubavitcher Rabbi, Joseph I. Schneerson, have been enabled, through its efforts to come to the United States.

“About seventeen of them will arrive in Los Angeles on the 16th or 17th of July, and a reception is being planned in their honor by Los Angeles Jewry.

“At a meeting held in the home of Mr. and Mrs. Max Wecksler, Monday night, a group of distinguished rabbis and laymen laid plans for the forthcoming reception, and for the maintenance of these refugees until steps can be taken for their future welfare in the country.

“Arrangements have been made for a reception in their honor by a committee headed by Harry Altman and Max Weksler, to be held Sunday evening, July 21, in the Jewish Home for the Aged, 325 South Boyle Ave, at a dinner.

“Others on the committee are…”

Then it gives the names of the people on the committee.

Lastly, it lists this amazing line-up of entertainment for the fete:

“Among those who will be entertain at the program will be Cantors Itzikel Schiff and Joseph Czycowski, accompanied by the world renowned composer Cantor Paul Discount.”

The students had been studying at the Chabad-Lubavitch Yeshivas Tomchei Temimim in Otwock, a suburb of Warsaw, when Nazi troops invaded Poland in September of 1939.

Together the group of yeshivah students, managed to make it to Lithuania, where they obtained transit visas from diplomat Chiune Sugihara, Japan’s consul in Kaunas (Kovno), enabling them to cross the Soviet Union and spend the war years in the relative safety of Kobe, Japan and Japanese-controlled Shanghai, arriving in 1941.

There they would suffer much hardship – the exhaustion of the journey had worn them down. And then they faced years of being held as prisoners of war, suffering from everything from the extreme change in climate to food poisoning. They were then liberated finally after the end of the war in the Pacific. 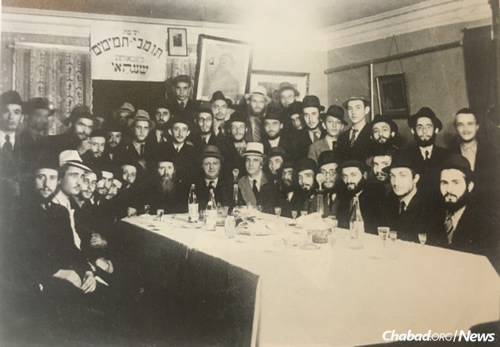 After the war they would come to America by way of Los Angeles in 1946, to be welcomed and given support as they came to establish themselves in this country.

Though one of those refugee students would play an important role in establishing the Chabad-Lubavitch movement in Los Angeles. In 1948, Rabbi Shmuel Dovid Raichik would be sent by the sixth Rebbe – Rabbi Yosef Yitzchak Schneerson, of righteous memory – who assigned the newly-married scholar to Los Angeles as his representative in California.

Notably, Rabbi Raichik would be one of the disciples of the sixth Rebbe who would plead with Rabbi Menachem Mendel Schneerson, of righteous memory, to become the seventh Lubavitcher Rebbe.

Rabbi Raichik would be given the mandate by the Rebbe to not just focus on building up one synagogue in the city of Los Angeles, but to spread out across the entire city and surrounding area.

Today Chabad-Lubavitch is one of the most widespread Jewish movements in greater Los Angeles.

Now let us take a look at the life of the Japanese diplomat who came to the rescue. And also take a peek at a monument in downtown Los Angeles which honors the hero of this story.

The Talmud states: “He who saves one life, saves the entire world.” This verse is written on the base of this monument to Chiune “Sempo” Sugihara – you will find it right next to a Starbucks off Central Avenue in Little Toyko, just over the river in downtown Los Angeles. 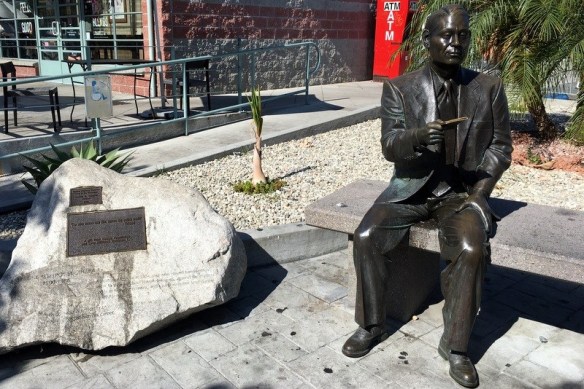 The statue was a gift of public art from the Neman Foundation and Levy Affiliated Holdings, LLC, honoring this hero.

The Los Angeles Museum of the Holocaust in Pan Pacific Park wrote a wonderful biography about this hero:

“Sempo Sugihara was a Japanese diplomat stationed in Lithuania who issued thousands of transit visas to Jewish refugees of the Holocaust. Though he did not have authority from the Japanese government to do so, Sugihara is said to have saved approximately 7,000 Jewish refugees though his efforts.

“Sugihara was posted in Kaunas, Lithuania in 1939. At the time, the Japanese government required that transit visas only be granted to those who had sufficient funds, and who had also procured an exit visa from Japan.

“Seeing the desperate condition of the men and women who came to his office, Sugihara, a low-level bureaucrat, disobeyed orders dispatched from the Japanese Foreign Ministry and issued visas anyway.

[Including those given to the Lubavitch yeshiva bochurs who ended up in Shanghai.]

“From August to September, 1941, Sugihara worked 18-20 hours per day, creating the same volume of visas each day that would have ordinarily been issued over the course of a month. Even as his office was shut down and he was leaving Kaunas, he threw visas to refugees waiting on the train platform.

“After the war, Sugihara was asked to resign from his post by the Japanese Foreign Office. It is unclear whether this was a punitive action, but nonetheless Sugihara spent the rest of his life working menial jobs, and settled in the Soviet Union for many years. He was eventually recognized for his efforts in 1985, and named ‘Righteous Among the Nations‘ by Yad Vashem. Chiune Sugihara died in 1986, largely unknown in his native Japan.

“When asked why he risked his career to save other people, he cited an old samurai proverb: “Even the hunter cannot kill a bird which flies to him for refuge.””

This is some deep history here.

Chiune “Sempo” Sugihara faced great danger. He didn’t just follow orders when he saw Jews suffering, he did everything he could to save them. He came to the rescue of so many Jewish people whose lives hung in the balance, even though it endangered him and his family. And on account of his defiant act, he would lose his career in the end.

And though when he died he was virtually unknown in his own country, he became well honored posthumously by the Jewish people all around the world.

Every time I am in Little Tokyo I see people pass this statue. Most people I know, even those who are normally in the know historically, they often miss this one. So I regularly find myself pointing it out to friends.

And now each time you pass, I ask you to remember how a righteous act by this Japanese diplomat half a world away would help Jews fleeing the Nazi find shelter in Japanese territories. And consider how his act of salvation of just one of these fleeing yeshiva students would benefit chassidic orthodox Judaism in Los Angeles so much.

Imagine what stories might be told of the other thousands of people Sugihara rescued!