March 23rd is National Tamale Day – At one times the tamal – and its closely related north of the border variation known officially as the tamale – was a treat as all-American as the hot dog and hamburger, and could be found on street corners across the entire country by the end of the 19th century.

This is “The Tamale” in East Los Angeles, which opened in 1928. It is shaped in the popular shape of tamales at the time. 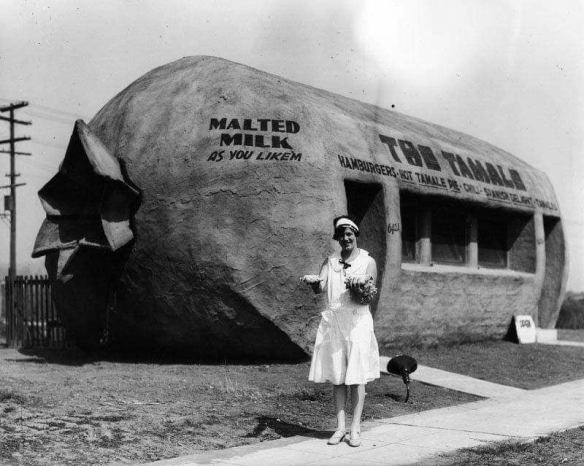 EAST LOS ANGELES- “The Tamale” was built in 1928. It’s an example of programmatic architecture – where buildings are made to attract customers, often looking like what they sell inside. This building is no longer a restaurant. It has changed hands many times, and has been used as a hair salon and even a dental office. It was recently up for sale. Sadly, it is not land-marked for preservation and there are limited protections because of its location outside of the City of Los Angeles, located in unincorporated Los Angeles County.

The shape and wrapping of this tamale was a result of the process becoming automated by the California Chicken Tamale Co. in 1892; giving rise to the San Francisco style tamale. The automation of tamale making would also give an interesting uniform shape to our local XLNT brand tamales, founded in 1894, which had a plant located off of Washington Blvd. in Los Angeles.

This machine-made process not just made them easier to make, it also made it possible to produce and sell across the country.

In 1892 the founder of California Chicken Tamale Co. would take his product first to Chicago, where it would be met with great success. And eventually make their world debut during the 1893 World Columbian Fair in Chicago, and would proliferate as a craze across the country.

And in Chicago a new tamale recipe would also be popularized and take the market by storm, the corn meal style tamale filled with chili con carne; which seems to be inspired by Southern and Mississippi Delta related ingredients and flavors African-Americans brought with them as they migrated. And maybe even influenced by similar dishes and recipes from the delta region. These style tamales would also be popularized by African-Americans, and sold in mass on corners across the country. [See: “The unique Chicago tamale, a tuneful mystery.”]

Now back in Los Angeles tamale carts managed by street vendors had existed as far back as anyone can remember, the presence of tamales here stretching back to the Spanish-Mexican settlement of the area. And by the start of the 1890s in the American-era, even before they had become well-known elsewhere, tamale carts had already begun to take their place at the old Placita.

As Los Angeles Times once recounted the story:

“They dominated downtown by the 1890s, specifically from the old plaza near what is today Olvera Street southwest toward 6th Street, between Temple and Main, blocks that attracted itinerant men, new residents and laborers looking to waste their week’s earnings in the many saloons. As dusk fell, an army of 2-by-4 pushcarts and wagons wheeled their way through this Tamale Row, setting up shop until last call and beyond.”

These tamale carts were essential to laborers, residents, migrants… and even the frequenters of saloon nightlife, they depended upon them. In time they even came to service the local working-class anarchists and socialists who held meetings close by. This certainly made them a target by local business owners and politicians. And eventually tamale carts were banned from the Placita in 1924. 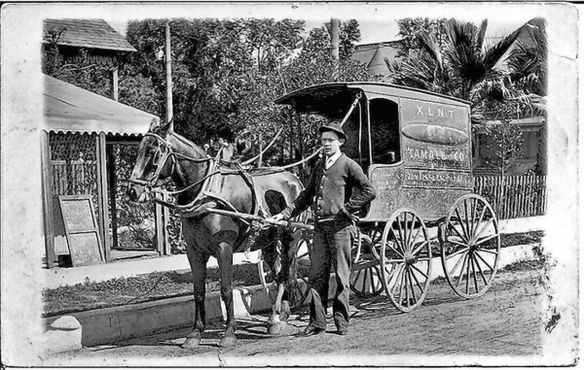 XLNT Tamale Cart – One of the original tamale carts of Los Angeles. Founded in 1894, they have been using the same recipe since 1906.

Then just a few years later in 1928, in a wide and open stretch of what is today known as Whittier Blvd., in the unincorporated territory of East Los Angeles, this tamale structure in the tradition of programmatic architecture arose. Offering a diner-like experience in which to enjoy tamales.

Now notice the items that they are serving here in the tamale cafe.

They are serving tamales; as well as chile con carne. Most likely both of them were provided by XLNT, one of original tamale carts which started a successful tamale empire in Los Angeles; making the tamales and the brick chile base. In the style of the time, the tamales were often served unwrapped and with chile con carne spooned over the top as a sauce. This “hot tamale” style is still a popular favorite with some old school Angelenos to this day.

This building is an interesting look at a fascinating period in Los Angeles history, indeed American history. I hope that one day The Tamale is historically land-marked and preserved!

In Los Angeles street vending has had a big influence on our local food fare. Many immigrants made ends meet by food vending, not just Mexicans; but Shiks, Pakistanis, and African-Americans as well. And by the end of the 19th century tamales were already one of the hottest selling items across the country.

In the classic film “War of the Worlds” in 1953, one of the most important scenes is when the townsfolk notice the smoking crater which is concealing the space ship. Crowds of residents, journalist and officials all come out to see the spectacle. And with all these people waiting around the local entrepreneurs talk about making it into a tourist attraction. One of the characters, a Mexican man with an accent, suggest they can sell to the visitors: “…tamales, enchiladas and hot dogs.”

Now what can be more American than that, and also more Southern Californian? 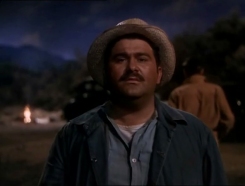 Jack Kruschen, a Canadian Jewish guy, playing a Mexican American in “War of the World” (1953) 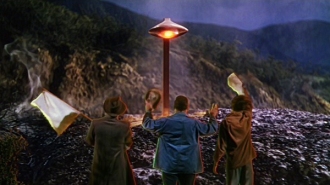 Oh and by the way, the actor who played the Mexican pulled off the part, he had the look and accent down, almost like he had come from the barrio himself. The part was actually played by a Canadian-born Jewish actor named Jack Kruschen.