Hillary Has Been Good For Boyle Heights 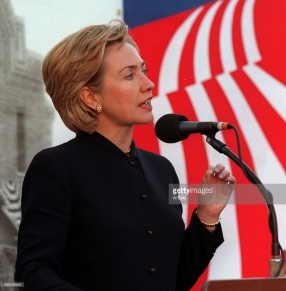 In December of 1998 Hillary Clinton came to Boyle Heights to designate the Breed Street Shul as a historical landmark. She earned a lot of dedicated followers that day, who have supported her own rise in politics since the beginning. Especially among us preservationists who remember her coming through for us.  (Photo by Al Seib, Los Angeles Times collection via Getty Images.)

And for me and many eastsiders, that all points towards a vote for Hillary for President.

Let me tell a story today, to bring this home for us.

In December of 1998 First Lady Hillary Rodham Clinton came to visit Boyle Heights to recognize one of the most important historical landmarks on the eastside, the Breed Street Shul – also known as Congregation Talmud Torah. It was her first stop in Los Angeles, on a tour that would take her to several historic landmarks throughout the city.

Hillary Clinton was touring the country as honorary chair of the White House’s “Save American’s Treasures” campaign, established by Executive Order 13072 in February 1998 by President Bill Clinton. This federal initiative was created to enable the preservation of historical buildings, art and published works. A public-private partnership between the U.S. National Park Service and the National Trust for Historic Preservation

This came at a time when many important historical sites and cultural treasures of our county were falling into neglect and disrepair.

On Thursday afternoon, Clinton stood in front of the dilapidated synagogue and addressed more than 500 people who gathered outside.

This shul and the work we are doing together to preserve it for future generations is an important statement,” she said. “We believe that there must be continuity between generations.”

Boyle Heights, Clinton said, always has been a community for immigrants.

“Boyle Heights immigrants today can think back to those immigrants 60 to 70 years ago who did not speak English–they spoke Yiddish,” she said. “In honoring this particular building, we honor the past.”

…Built in 1923, the synagogue was an integral part of the flourishing Jewish community from the 1920s to the 1950s, when Boyle Heights was home to about 90,000 Jews, then the largest Jewish population west of Chicago.

As the Jewish community moved to other areas, so did the synagogue’s worshipers. By the late 1970s, the congregation wasn’t able to gather a minyan of 10 men to pray.

The congregation ceased services in 1993, when the last rabbi of the Congregation of Talmud Torah wanted to raze the building and sell the property. Last July the City Council voted to buy the synagogue and turn it over to the Jewish Historical Society.

The shul has great personal significance to several City Council members. Councilman Hal Bernson’s Bar Mitzvah was held there, and Councilwoman Jackie Goldberg’s aunt, uncle and cousins were members of the congregation. Councilman Mike Feuer’s mother grew up a few blocks away.

After Clinton spoke at the synagogue, she addressed a crowd at the Los Angeles Theater, which is one of the magnificent historic theaters in the city…

This event was a turning point in the historical preservation of the Breed Street Shul. And this day would be regarded as one of the historical highlights of our community, that Hillary Clinton came to our neighborhood for this very special cause.

If you have been to the Breed Street Shul over the years, you will probably remember that there have often been pictures of Hillary Clinton posted which commemorate this event. In remembrance of how she came through for this community, in helping save one of our most precious Boyle Heights landmarks. 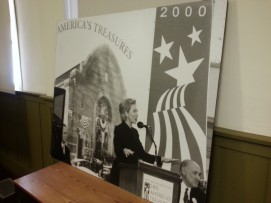 A sign that supports Hillary, dated with the year she was running for her freshman NY Senate seat in 2000. (Photo Taken: Breed Street Shul, Feb 2014)

For this reason many people who value the restoration of this site have voiced their enthusiastic support for Hillary Clinton throughout these twenty-years. And some of us have also been some of the most ardent supporters of Hilliary for President in this current election, on account of her legacy of support for the historical and cultural integrity of our neighborhood.

I am proud to count myself as one of those: Go Hillary!

Over the years I have heard of this historical event by several people who remember her visit and met with the first lady on that day. Jewish historians have told me that they came away impressed with how much Hillary knew about the Jewish community and Yiddish organizing history of Boyle Heights when she came. And also Richard Alatorre, he once related in conversation how surprised he was of the in-depth knowledge she had of the Mexican-American social issues and of the organizing history of the area.

Well… not any of this should come as a surprise to us if we really consider it.

Indeed, Hillary Clinton has been literally demonized by conservatives for decades for her interest and critical study of the work of one of the most influential community organizers to ever effect Boyle Heights; Saul Alinksy, of the Industrial Areas Foundation. Whom she studied for a year in community organizing and wrote a critical analysis of his work for her university graduate thesis, with his direct help.

Though because most people don’t know history, many have probably only ever heard of this guy from conspiracy theorist nuts, who scandalize this. However, her inside view of his work is one of her greatest merits.

Alinksky had inspired and funded the creation of the CSO, which helped elect Edward Roybal. Alinsky was also the primary mentor of Cesar Chavez and Dolores Huerta.

That’s how she would have known so much about the specifics of the social issues and history of organizing in the area, both Jewish and Latino; from Alinksy’s work.